Much More Than A Decoration 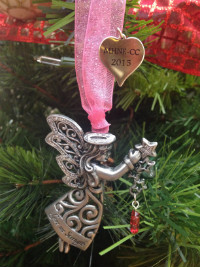 Every day, the Cancer Center at Memorial Hermann Northeast Hospital brings together world-class skill, leading-edge technology and the most modern care available.

The Center has also brought together patients and their families in a celebration of survivorship at its annual Christmas party for the last 26 years. Each party has its own unique Christmas tree ornament that is given to those who attend – a decorative memento that denotes another holiday season with friends and family, another year of memories and another year of life.

“It’s a symbol of their survivorship,” said Gayle Bratsakis, CTR, Program Coordinator for the Cancer Registry at the Center. Bratsakis, who has worked at the Center for 27 years and helped begin the party tradition in 1991, now coordinates the annual event.

“Most of the people who come can tell you how many ornaments they have because they know how far they’ve come since they started treatment,” she said.

This year’s party, attended by approximately 150, was the second for 80-year old Jay D. Kersh, a lifelong resident of Humble who was successfully treated for B cell lymphoma at the Center.

“You’re getting to see other people who have had the same kind of problems you’ve had and yet, they’re surviving,” said Kersh’s wife, Gloria. “We all have something in common and then we get to see each other and wish each other Merry Christmas.”

Robert Vincent, a 72-year old retiree and prostate cancer survivor, has been a special attendee for the last two years. The father and grandfather, has donned a red suit and cap, black boots and white beard in the role of Santa Claus to hand out the ornaments to fellow survivors.

“It helps to share those experiences with other survivors here,” said Vincent in a baritone voice befitting of his role. “They’re always very proud to tell me how many years it’s been and how many ornaments they’ve gotten over the years as a recipient.”

Count Vincent among those who are proud and thankful.

When diagnosed, Vincent was expecting to make hour-long trips for treatment from his home in Kingwood to the Texas Medical Center. Instead, he received expert care closer to home but beyond his expectations.

“It always seemed that when I came in for my treatments, I felt like I was the only one here, that they were all here to help me,” Vincent said. “The people here are great. They are great at their job but they are also great people because it comes from inside.”

The feeling is mutual, according to Bratsakis.

“It’s just a special day for us and it always has been,” Bratsakis said.