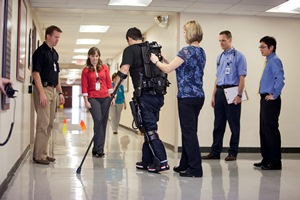 The world of rehabilitation is always changing and, through that, TIRR Memorial Hermann has continued to set the standard for high-quality, evidence-based rehabilitation and cutting-edge research,” said Carl Josehart, Senior Vice President and CEO, TIRR Memorial Hermann. “Our staff is dedicated to changing lives for the better and providing the highest level of care to each patient who comes through our doors. Receiving this acknowledgement from such a reputable organization reaffirms that commitment.”

In addition to TIRR Memorial Hermann’s recognition, Memorial Hermann-Texas Medical Center ranked No. 2 overall hospital in Texas, which is an honor given only to hospitals that were high-performing across multiple areas of care.

The recognition of Memorial Hermann’s complete neuroscience program, which includes acute care services for pediatric and adult patients, in addition to the rehabilitation services at TIRR Memorial Hermann is indicative of the System’s commitment to the full continuum of care.

Since joining Memorial Hermann, I continue to be impressed with the passionate staff, exemplary care and commitment to overall safety and quality,” said Dr. Benjamin K. Chu, President and CEO, Memorial Hermann Health System. “I am incredibly proud of the patient-centered work I have witnessed throughout the entire system and congratulate our employees and affiliated physicians for receiving such well-deserved recognition.”

The annual U.S. News Best Hospitals rankings, now in their 27th year, help guide patients to hospitals that deliver outstanding care across 25 specialties, procedures and conditions. The Best Hospitals methodologies include objective measures such as patient survival, the number of times a given procedure is performed, infection rates, adequacy of nurse staffing and more.

U.S. News evaluates nearly 5,000 hospitals nationwide,” said Ben Harder, chief of health analysis at U.S. News. “A hospital that emerged from our analysis as one of the best has much to be proud of.”

For 2016-2017, 153 hospitals were nationally ranked in at least one specialty, while 1,628 received a high performing rating in one or more specialties, procedures or conditions. In rankings by state and metro area, U.S. News recognized hospitals that were high-performing across multiple areas of care. Best Hospitals was produced by U.S. News with RTI International, a leading research organization based in Research Triangle Park, N.C.