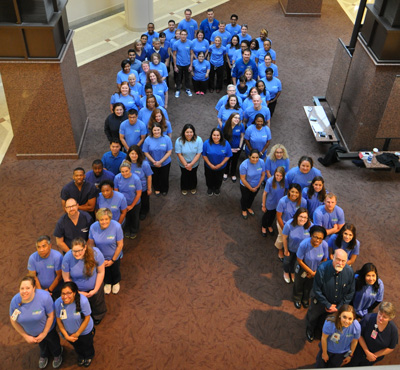 A sea of blue filled the atrium of Children’s Memorial Hermann Hospital as teams of physicians, medical professionals and community advocates gathered Friday at an event co-hosted by McGovern Medical School at UTHealth and Memorial Hermann Texas Trauma Institute to commemorate Child Abuse Prevention Month and raise awareness about an important and distressing issue.

“Thank you all for being here today and for showing your support for this difficult topic. Child abuse is a hard thing to talk about but a dialogue is so necessary because, if we stay silent, then nothing ever changes,” Distefano told the audience Friday. “That’s why we’re all here today: To honor the children affected by some sort of abuse or maltreatment who can’t speak for themselves. We are here to give a voice to the voiceless.”

The numbers of abused and neglected children grows every year. Last year alone, the Texas Department of Family and Protective Services confirmed more than 66,000 cases of child abuse and neglect across the state, including more than 6,000 in the Houston area. While maltreatment can strike children at any age, the youngest victims are the most vulnerable, according to the most recent data from the state agency. One in every six children abused and neglected in Texas in 2015 was an infant. A total of 171 deaths last year were linked in some way to child maltreatment.

“These statistics are very real and very upsetting,” Distefano said. “No child should ever lose his or her life because of maltreatment because it’s a problem that is 100 percent preventable. That’s why we have been working hard alongside our community partners to help eradicate the scourge of child abuse through an array of partnerships and programs.”

The event featured several special guests, including Barbra Denniston, team leader and advocacy coordinator for Child Advocates, who spoke about the tremendous impact volunteers can make on children’s lives. Her remarks were followed by a moving musical tribute by the Dr. James “Red” Duke Elementary School Choir from Alvin ISD who performed the song “Come Away and Sing.”

Children’s Memorial Hermann Hospital and UTHealth have long been at the forefront of preventing child abuse and neglect by screening new mothers for postpartum depression (PPD), sending specially-trained social workers to meet with moms suffering from PPD and providing them with a much-needed support system. And for the Period of PURPLE Crying® – the phrase used to describe the time in a baby’s life when they cry more than any other time – Children’s Memorial Hermann Hospital is delivering a parent education program to families in the neonatal intensive care unit, educating parents on infant behavior.

The two entities are teaming up again on a new state-funded grant that will help medical providers identify families at high risk for child maltreatment and offer early interventions. The new initiative, a partnership with DePelchin Children’s Center, was revealed at the ceremony Friday. Children’s Memorial Hermann Hospital and UTHealth have also received funding to start programs providing home visits to at-risk families, counseling to children and families recovering from trauma, and to help children whose health problems are complicated by unmet psychosocial needs.

“By giving providers the tools they need to proactively screen for these risk factors in families long before the maltreatment happens, and by helping medical professionals intervene early on, health care institutions can help promote children’s health by strengthening families and supporting parents,” said Dr. Girardet. “We are doing our part to help put an end to child abuse. But there is more work to be done, which is why it’s important that we all join together in this effort.”

At the close of the ceremony, Dr. Lapus led the group in a powerful pledge aloud together, each individual promising to “educate myself about the realities of child abuse… to give a voice and report any and all suspicions… to cast a light in the darkness by doing the right thing the first time, every time.”

Before leaving, each participant received a special token, a “Pinwheels for Prevention” pin to wear as a visible show of support for all children who have been abused and neglected. Pinwheels are a national symbol for child abuse prevention, a reminder that all children deserve a great childhood. These special badge pins were graciously made by the generous eighth-grade students from Salyards Middle School in Cypress ISD.