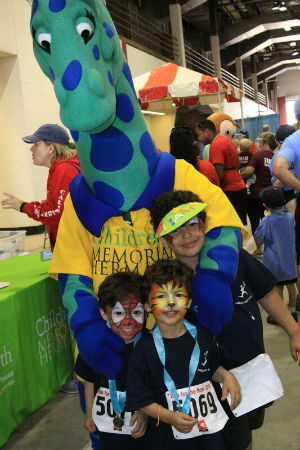 A record number of participants joined in the fight against brain cancer this year, hitting the pavement at the 14th Annual Run for the Rose on Sunday, April 10.

More than 5,500 people flocked to NRG Park to participate in one of the three main events: The 5K race/walk, a 1K family run/walk and a Survivor Stroll, which featured more than 100 brain tumor survivors leading the runners with a short walk to start the race.

The event, which is sponsored by the Dr. Marnie Rose Foundation, was wildly successful, raising more than $600,000 in its ongoing effort to provide financial support to pediatric health initiatives at Children’s Memorial Hermann Hospital, brain cancer research at The University of Texas MD Anderson Cancer Center, and the Dr. Marnie Rose Professorship in Pediatric Neurology at McGovern Medical School.

Since its inception, the foundation has donated more $5.35 million, much of it raised from the annual Run for the Rose races which were started to honor Marnie Rose, MD, a first year pediatric medical resident at Children’s Memorial Hermann Hospital who was diagnosed with a rare form of brain cancer and later died from complications of the disease.

“It’s so incredibly inspiring and gratifying to see the community join together for a cause that’s very near and dear to our hearts,” said Rose’s mother, Lanie. “It’s heartening to know that Marnie’s generous and kind spirit continues to live on every year as the event grows increasingly popular, helping us raise awareness and funds to battle this terrible disease.”

Immediately following the event, participants enjoyed a post-race party with food, drinks, games, a silent auction, and an awards ceremony recognizing the top male and female runners from the different age group categories.