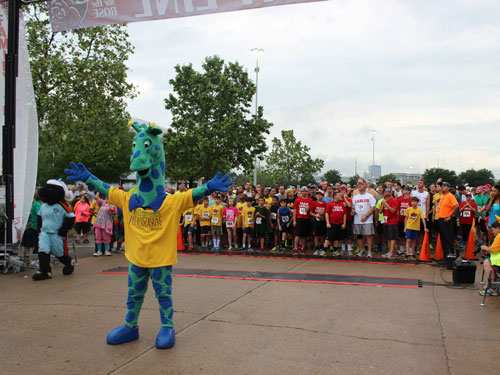 Patients, family members and supporters will rally together on Sunday, April 10 in the fight against brain cancer as they race for a cure in the 14th Annual Run for the Rose at NRG Park. Proceeds from the run will go toward supporting pediatric health initiatives at Children’s Memorial Hermann Hospital and brain cancer research at The University of Texas MD Anderson Cancer Center.

The annual event is sponsored by the Dr. Marnie Rose Foundation, a public charity that has donated more than $4.75 million since 2003. The run honors Marnie Rose, MD, a first year pediatric medical resident at Children’s Memorial Hermann Hospital who was diagnosed with a rare form of brain cancer and later died from complications of the disease.

“We are tremendously grateful for the support of the Dr. Marnie Rose Foundation and are thrilled to once again join forced with our colleagues at MD Anderson to celebrate the legacy of a woman who left a lasting imprint on everyone she touched,” said Susie Distefano, Senior Vice President and CEO of Children’s Memorial Hermann Hospital. “Dr. Rose’s spirit lives on, and we have the privilege of honoring her memory every year with this wonderful event.”

From the moment she was diagnosed in 2002, Rose became an inspiration for others struggling with cancer and other difficult diseases. Despite receiving the devastating news, Rose continued to work with the pediatric patients at Children’s Memorial Hermann Hospital while also agreeing to publicly share details of her cancer journey and her personal life with a TV crew from the 2002 ABC reality series “Houston Medical.” Rose captured viewers’ hearts with her courage and indomitable spirit. Her death on Aug. 23, 2002, just five weeks after the airing of the show’s final episode, sparked an immense outpouring of grief.

Rose’s parents, Lanie and Jerry, organized the inaugural race in 2003 to honor their daughter’s memory and empower other patients and families struggling with similar challenges. Since the race was launched, the number of brain tumor survivors participating in the run has increased steadily each year, thanks in part to the medical advances funded by the Dr. Marnie Rose Foundation and practiced at Children’s Memorial Hermann Hospital and MD Anderson. At last year’s run, more than 5,000 participants registered to race, including 80 brain cancer survivors.

“Marnie had such a beautiful, giving and kind spirit, but she was taken from us too soon, and we have vowed to do whatever we can to prevent other families from experiencing the same tragedy,” Lanie Rose said. “Run for the Rose is a tribute to Marnie’s compassion and dedication to her patients. We are beyond appreciative for the continued support and generosity of the thousands of people who give and donate every year.”

“The partnership between our Brain Tumor Program at MD Anderson Cancer Center and the Dr. Marnie Rose Foundation has been vitally important,” said Dr. Raymond Sawaya, chairman of the department of neurosurgery at MD Anderson. “For more than a decade, we have been able to fund innovative clinical and translational research that has resulted in advances in treatments and survival benefits for a number of our patients. Some of this research could not get external funding and would not have been possible without the contributions of the foundation. Our entire program is indebted to the extraordinary efforts of Lanie Rose and her team.”

In addition to funding research and other initiatives, the Dr. Marnie Rose Foundation in 2015 established the Dr. Marnie Rose Professorship in Pediatric Neurology, a permanent endowment for the use and benefit of McGovern Medical School. World renowned pediatric neurosurgeon, David Sandberg, MD, Director of Pediatric Neurosurgery at Memorial Hermann Mischer Neuroscience Institute at the Texas Medical Center (MNI), Children’s Memorial Hermann Hospital and McGovern Medical School, has been selected as the first holder of the esteemed professorship. Sandberg is also affiliated with MD Anderson.

“I’m humbled by the honor, and delighted that I can help play a role in helping honor Marnie’s memory by contributing to the crusade against this deadly disease,” Dr. Sandberg said. “Every year, pediatric brain cancer kills thousands of children and causes countless others to require intense medical treatment. This campaign unites survivors, families and medical practitioners, giving us the strength to work together in the effort to eradicate pediatric brain cancer.”

Run for the Rose kicks off at 8 a.m. with a Survivor Stroll, where all participating brain cancer survivors lead the runners with a short walk to start the race. The stroll is followed by the 5K race/walk which includes both timed and non-timed options. A 1K family run/walk is also available, and all participants are invited to join the post-race party, which includes food, drinks, activities for children, music, a silent auction and an inflatable, walk-through brain exhibit. Awards will be presented inside NRG Arena immediately following the race.