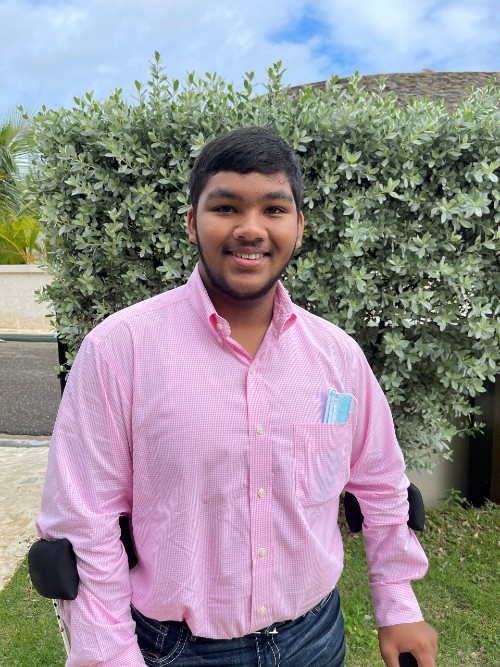 A novel treatment approach at Children’s Memorial Hermann Hospital is giving 17-year-old Himanshu Prasad the opportunity to live life free of the muscle tightness and spasticity that has plagued him since birth.

Thanks to a multidisciplinary team led by pediatric neurosurgeon Manish N. Shah, MD, at Children’s Memorial Hermann Hospital, in partnership with UT Physicians and UTHealth Neurosciences, the high school senior, who plans to study material sciences and engineering at Texas A&M University, will start college next year without the aid of a wheelchair.

As a child, Himanshu received multiple diagnoses, including cerebral palsy (CP) and cervical myelopathy. “Since birth I have been to many doctors, and they all had their own opinions,” says Himanshu. “When I started looking at colleges, the center where I was going at the time suggested I get a wheelchair for college. I didn’t want that.”

An online search into CP and spasticity led him to Dr. Shah and the affiliated pediatric neuroscience team at Children’s Memorial Hermann Hospital. Based on an initial examination of Himanshu, Dr. Shah believed Himanshu had been incorrectly diagnosed. A few months later, new images confirmed these suspicions.

The affiliated pediatric neuroscience team spoke with Himanshu and his parents and explained that Himanshu had hereditary spastic paraparesis (HSP), a term used to describe a group of inherited neurologic disorders characterized by progressive weakness and spasticity (stiffness) of the legs. As the disease progresses, individuals with HSP may require the assistance of a cane, walker or wheelchair.

Dr. Shah believed that Himanshu was a good candidate for selective dorsal rhizotomy (SDR), a neurosurgical procedure that selectively destroys nerves in the spinal cord to decrease excessive muscle tone or tightness in the legs causing spasticity.

While SDR has become a relatively common procedure for spastic diplegia and spastic CP, the affiliated medical team at Children’s Memorial Hermann Hospital takes a different approach. “We employ a highly effective multidisciplinary treatment protocol, including a special form of SDR and a unique rehabilitation protocol,” explains Dr. Shah. “The postoperative mobility results can be excellent—young patients with a strong commitment to succeed can achieve independent walking.”

Whereas in most cases, the procedure performed is a five-level laminectomy, meaning a surgeon removes a portion (the lamina) of five levels of vertebrae, Dr. Shah performs a minimally invasive, single-level procedure, known as the Park rhizotomy, named after Washington University neurosurgeon T.S. Park, MD, its pioneer. From 2006 to 2014, Dr. Shah worked under Dr. Park as a resident and fellow. Due to Dr. Shah’s experience and specialized skill, Children’s Memorial Hermann Hospital is the only hospital in the region to offer this SDR and is one of the highest-volume SDR centers in the country.

“The single-level procedure is much less painful, and the results are longer lasting,” he says. “And there’s an almost negligible risk of developing scoliosis, which is a big complication in the multilevel procedure.”

Post-operative rehabilitation begins at Children’s Memorial Hermann Hospital with help from the hospital’s pediatric physical therapists. Patients undergoing SDR surgery at Children’s Memorial Hermann Hospital are up and moving the next day. “Nobody else in the country gets them up the next day,” says Dr. Shah. “Everybody else makes them wait, typically 4 or 5 days, and every day you spend in bed makes you less mobile.” On the third day following surgery, post-operative rehabilitation continues at TIRR Memorial Hermann, ranked No. 2 among the country’s top rehabilitation hospitals in the U.S. News & World Report’s Best Hospital rankings for 2021-2022.

“When we first saw Himanshu, his condition had deteriorated,” says Dr. Shah. “Had we not done anything, his condition would have worsened over time to the point where he would have been in a wheelchair permanently.”

With his sights set on independence, Himanshu is doing the hard work. “I will happily go through this year of pain and therapy in order to have a lifetime of independence,” he says. “This will be something I can tell people: I lived through my childhood with a disability and recovered from it. If I can go through something like this, then anything is possible.”

Dr. Shah is confident his patient will succeed. “Himanshu is a super sharp kid,” says Dr. Shah. “I told him he has an open invitation to come and work with me in my lab anytime.”