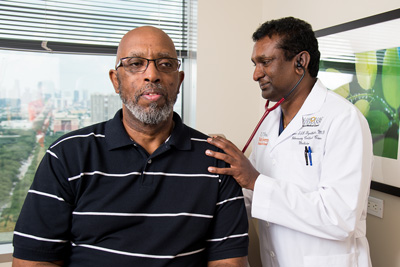 Houston Deputy Sheriff Bryan Durham recalls the day he first felt something was wrong. “I was arresting a suspect who had become combative. I wrestled him for about 30 seconds to get him into handcuffs, and it felt like I had fought for an hour. After I subdued him, I couldn’t catch my breath. I was sweating profusely. That had never happened before,” says Durham.

Concerned, Durham, 55, and his wife went to see a Memorial Hermann affiliated pulmonary and critical care specialist. “The doctor ran some tests, and afterwards, he asked me what kind of work I did. I said I was a police officer, and he said, ‘As of today, you are no longer a police officer. With what you have, you can no longer be a police officer.’”

The tests showed that Durham had interstitial lung disease (ILD), a term that encompasses a large group of lung disorders that can cause scarring, or fibrosis, of the lungs. The scarring can stiffen the lungs, causing permanent breathing problems.

Referred to the Center for Advanced Heart Failure

Dr. Jyothula’s first task was to identify what specific type of ILD Durham had, to determine treatment options. “We took a thorough medical history, to check for immunobiological diseases, a drug injury, inhalation injury, or any indication of any markers of rheumatological diseases. We also performed a high-resolution CT scan of the chest and ultimately performed an open biopsy of the patient’s lungs,” said Dr. Jyothula. “The biopsy indicated the patient had idiopathic pulmonary fibrosis.”

Idiopathic pulmonary fibrosis (IPF) is a form of pulmonary fibrosis (PF), a progressive lung disease for which there is no cure. “Idiopathic” means of unknown cause, yet smoking and a family history of PF are among the suspected risk factors. Individuals with IPF require increasing amounts of oxygen and can develop lung failure, a life-threatening condition requiring a lung transplant. Approximately 50,000 new cases of PF are diagnosed in the U.S. each year.

Dr. Jyothula prescribed medication to help alleviate symptoms and slow the progression of the disease, but explained to Durham that he would he would eventually require a lung transplant. To be evaluated for a lung transplant, however, Durham would need to lose weight. His body mass index (BMI) of 40 exceeded the maximum of 35 to be considered a candidate for a transplant.

When Durham’s efforts to lose weight through diet and exercise were unsuccessful, Dr. Jyothula referred Durham to Memorial Hermann affiliated bariatric surgeon Kulvinder Bajwa, MD, associate professor of surgery at McGovern Medical School, for a consultation. Dr. Bajwa has been working with high-risk patients from the Center for five years.

“In many respects, Durham was a good candidate for weight loss surgery, which would likely enable him to lose the necessary weight to be considered a candidate for transplantation. But there was one significant catch: Durham’s diminished lung capacity, caused by his lung disease, made him a significant risk for the surgery,” says Dr. Bajwa. 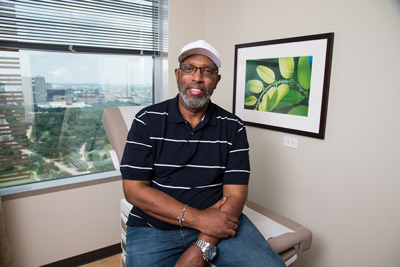 The Team to Handle Complex Cases

“Very few centers are willing to perform this type of surgery on patients with compromised lung function because of the increased risk of respiratory failure and prolonged respirator dependency, which can be catastrophic,” says Dr. Bajwa. “But at Memorial Hermann, we have the resources and expertise to handle complex cases such as this. We knew that without losing the weight, the patient would not be eligible for a life-saving transplant. We believed the potential benefit outweighed the real risk. Drawing from previous experience with heart transplants, the bariatric surgeons and the Center for Advanced Heart Failure team have collaborated to offer such ‘out of the box’ options for progressively disabling conditions.”

While Durham was initially apprehensive about undergoing surgery, his lung capacity was deteriorating rapidly, to the point where he was dependent on oxygen to breathe. On December 31, 2018, Dr. Bajwa performed the minimally invasive, laparoscopic gastric sleeve procedure on Durham. The surgery was a success, and two days later Durham was home recuperating.

What lies ahead for Durham is uncertain, but he is close to achieving the BMI required to be evaluated for a lung transplant. “If his pulmonary fibrosis progresses despite his weight loss, and if he still requires oxygen supplementation, then he will be an appropriate candidate for a lung transplant,” says Dr. Jyothula.

The physicians affiliated with the Center for Advanced Heart Failure work closely with the Memorial Hermann lung transplant team to provide comprehensive care for patients with chronic lung disease. “Memorial Hermann has a world-renowned facility and a great team of affiliated physicians and healthcare providers who can accurately diagnose and treat patients with chronic lung diseases, including their comorbidities (associated health conditions), such as morbid obesity,” says Dr. Jyothula.

To find out more about organ transplantation or to schedule an appointment with an affiliated physician at the Transplant Center, please call (713) 704-5200.