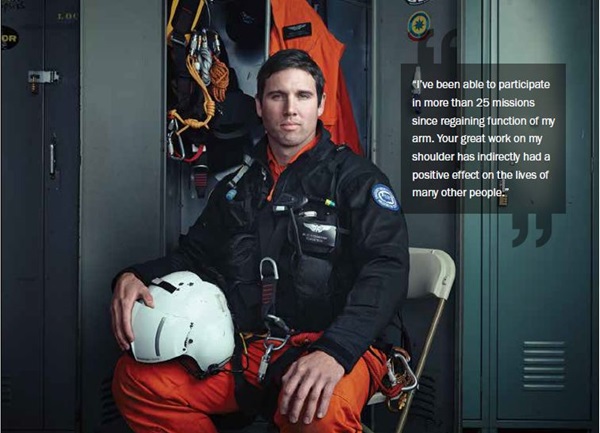 In September 2011, alpine enthusiast and search-and-rescue team member Miles McDonough fell 65 feet while scaling Mount Stuart in the North Cascade Mountains of Washington state. In the accident, he fractured his right humeral head and scapula, an injury that damaged the brachial plexus nerves controlling movement of the shoulder and biceps muscles. Twenty hours passed before he was rescued and transported to emergency care.

McDonough spent the first eight weeks of his recovery with his right arm immobilized in a sling, and when the sling came off, he was unable to move his upper arm and shoulder. After three months of physical therapy with no significant improvement, the nerve injury became apparent. He and his family began their search for an expert in peripheral nerve surgery. “My family and I found experienced neurosurgeons at the Mayo Clinic and at Washington University in St. Louis, but ultimately we decided to see Dr. Daniel Kim because of his exceptional training, experience and reputation,” he says.

Internationally renowned neurosurgeon Daniel H. Kim, MD, FACS, FAANS, is known for his expertise in reconstructive peripheral nerve surgery, complex spinal reconstruction and minimally invasive spinal surgery, both endoscopic and robotic. A clinical and educational leader in his field, Dr. Kim has authored hundreds of papers and published 20 surgical textbooks, many of which are used at leading medical schools to teach standard-of-care techniques for neurosurgery. He is a pre-eminent researcher in peripheral nerve repair through nerve transfer and nerve graft, and is also recognized for his work in neurorehabilitation through robotics and cortical stimulation, spinal biomechanics and innovative neuromodulation treatments for chronic pain.

By the time McDonough found Dr. Kim, the six-month window for successful reconstructive peripheral nerve surgery had almost passed. Dr. Kim rearranged his schedule to accommodate McDonough, who flew to Houston accompanied by his father, a urologist, and his mother, a registered nurse. A week later, on March 14, 2012, Dr. Kim took his patient to the OR.

“Dr. Kim took great care to explain the surgical procedure and also provided objective data on previous surgeries he’d performed so that I knew the risks and benefits of the surgery I was electing to undergo,” McDonough says. “Based on the empirical data and Dr. Kim’s experience, I knew I had a 75 percent chance of improvement.”

Dr. Kim has published more than 150 articles on reconstructive peripheral nerve repair in peer-reviewed journals and is the author of three textbooks on the subject. “We harvested the sural donor nerve from his right leg and used it as a graft to repair several branches of his supra scapular nerve,” he says. “We also performed a nerve transfer procedure to the nerve innervating the deltoid muscle in the same arm. Once the connection was reestablished, we waited for the nerve to regenerate.”

After a year of physical therapy, McDonough recovered nearly 100 percent of the function he’d lost in his right arm and shoulder. By April 2013, he had returned to work as an emergency medical technician with the Snohomish Country Helicopter Helicopter Rescue Team. In an email to Dr. Kim dated May 2015, McDonough wrote, “Thanks to my successful recovery I was able to return to alpine climbing and ski mountaineering, two of the most significant passions in my life. Even more importantly I was able to continue my work with the rescue team. I’ve been able to participate in more than 25 missions since regaining function of my arm, and in March 2015 our team was recognized with the Airbus Helicopters Golden Hour Award for the Helicopter Association International for our rescue work. Your great work on my shoulder has indirectly had a positive effect on the lives of many other people.”

Looking Ahead to a Bright Future

After completing two years of prerequisite coursework, McDonough began work on his medical degree at the University of Washington School of Medicine in the fall of 2015. “The care I received from Dr. Kim inspired me to strive for excellence in my new career so that someday I will be able to provide a similar level of care to others in dire straits,” he says. “As I gradually take on the role and responsibilities of a physician and begin providing care to my own patients, I’ll always be grateful for the care Dr. Kim provided me.”