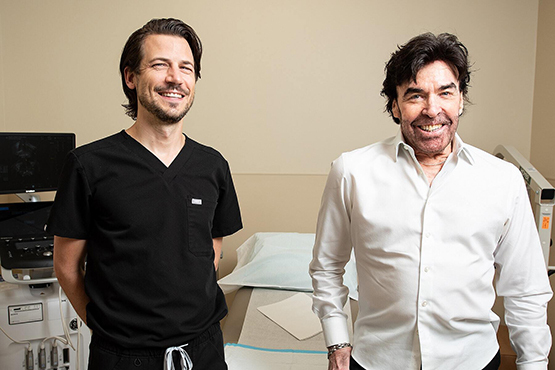 Having a 50-year career in sales and marketing, Kriss Woodbury’s job is to get messages out to consumers. But it was a message from his physician that stopped him in his tracks—“You have prostate cancer.”

Before the diagnosis, Woodbury didn’t have any symptoms. But after a visit with his PCP, it was confirmed he had an elevated PSA (Prostate Specific Antigen) level of 4.5, just above the normal range of 4. PSA is a protein produced by both normal and malignant cells of the prostate gland. A PSA test is a blood test that measures the levels of a specific protein produced by cells in the prostate gland. Abnormally high PSA levels can indicate the presence of prostate cancer.

Woodbury knew he was at higher risk because his father was diagnosed with prostate cancer when he was in his 70s. Over the next two years, his levels continued to steadily climb, eventually reaching 5.25. It was time to take action.

His primary care physician referred him to David Kent, MD, a Memorial Hermann Medical Group (MHMG) urologist affiliated with Memorial Hermann Memorial City Medical Center and Memorial Hermann Katy Hospital. Kent ordered a number of diagnostic tests including an MRI, which came back inconclusive, as well as biopsies. The biopsies showed that six of the eleven specimens evaluated were “dirty” or positive for cancer.

After evaluating Woodbury, Dr. Smith confirmed that Woodbury was a good candidate to undergo the Retzius-Sparing Prostatectomy, a procedure that allows the surgeon to approach the prostate from below, rather than from above the bladder. In the traditional prostatectomy, the most common problem following the surgery is leakage and difficulty passing urine. With the Reizus-Sparing Prostatectomy, most patients achieve urinary control more quickly, allowing them to get back to their daily lives. Dr. Smith is one of few surgeons locally who are skilled in this new technique, and he has been performing it on his patients for more than a year with great results.

“More than 75 percent of my patients who undergo this procedure experience immediate continence compared to 25 percent for patients who underwent the classic approach,” Dr. Smith says. “It’s a dramatic difference for both urine control and better erectile function. I truly believe this surgical technique is the future for prostate cancer patients.”

Woodbury describes Dr. Smith as an incredibly skilled surgeon who takes the time to get to know his patients and makes sure they know exactly what the treatment plan will be.

“I remember being in his office and thinking how hands-on he is with his patients,” Woodbury says. “He sat down with me and began drawing pictures to show me exactly what he would do in surgery. This extra step shows the kind of surgeon he is. His bedside manner is the gold standard, and he is truly a gifted surgeon.”

Dr. Smith used that gift on April 6, 2021, when he performed a Reizus-Sparing Prostatectomy on Woodbury. “He had an elevated PSA without symptoms,” says Dr. Smith. “He had intermediate risk prostate cancer, meaning the cancer was confined to the prostate, making him an ideal candidate for surgery.”

Before surgery, Woodbury knew he had to do his part by exercising and following a healthy diet. His commitment to being healthy paid off. Despite having six incisions from the surgery, he didn’t take any pain medication.

“The fact that I never had to take a pain pill after surgery is a testament to Dr. Smith’s skill level,” Woodbury says. “I knew I wanted to get back to my daily routine quickly, so I made the commitment to be the healthiest patient I could be before undergoing surgery. Doctors deserve the best patient so they can successfully of their jobs.”

Today, Woodbury is doing incredibly well following his April surgery. At 72, he is still working with no plans to retire. His commitment to being healthy is still going strong as he runs most days, rain or shine—to stay in shape.

“His prognosis is excellent,” Smith says. “His chance of needing postoperative radiation is minimal, because he has no detectable cancer on his pathology, or in his first PSA.”

Among many things, Woodbury says that his cancer experience has taught him not to be afraid.

His advises men to be proactive when it comes to their health and undergo the screenings recommended by their physicians.

“You are in control of your health,” Woodbury says. “It’s so important to take action. The worst thing you can do is put something off when you should have acted. I’m so grateful for the compassionate team at Memorial Hermann who took care of me and got me back to work and life.”