Lewis: Back on Stage Making Music 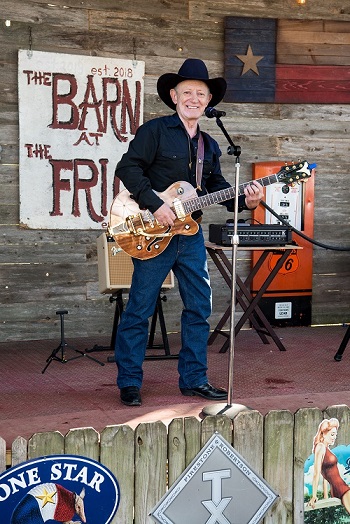 After retiring in 2017, Lewis Frey turned his part-time love of playing his guitar, into a full-time job. He had regular gigs around the Houston area, and he and his band were enjoying entertaining their audiences. But, in June 2019 he had a stroke which put a pause in his playing.

“I tried to get out of bed, but fell face first to the floor and broke my nose,” said Lewis. “My wife called 9-1-1 and the ambulance took me to Memorial Hermann Hospital – Memorial City.”

He was there for three days, and then transferred to Memorial Hermann Rehabilitation Hospital – Katy (Katy Rehab) where he spent two weeks as an inpatient. “The physical therapists had me up and walking with a walker on my first day,” said Lewis.

After his inpatient stay at Katy Rehab, Lewis was discharged to go home and carry on his therapy as an outpatient. Knowing he was a professional guitar player and singer, his occupational, physical and speech therapists coordinated and focused on the skills he would need to continue with his music.

“Lewis was a lot of fun to work with!” said physical therapist Paige Vespa, PT, DPT. “He was open to try any activity, no matter how strange it sounded and had a positive attitude surrounding his therapy and recovery. He met all of his goals in physical therapy and we incorporated lots of multitasking-type of activities so that he could return to his music, and walk around while singing and playing his guitar.”

Occupational therapists continued to work on Lewis’ fine motor skills so that he could once again pluck the strings of his guitar.

“His stroke affected his left hand, rendering it weak and uncoordinated, which robbed him the ability to play guitar, his lifelong passion and career,” said Rachele Minor, OTR, “All activities and exercises were focused on the strengthening, coordination, and dexterity required for guitar playing.”

Lewis’ other occupational therapist, Darrell Parker, MOT, OTR, said, “At one point Mr. Frey expressed to me that he was stronger but still couldn't press individual guitar strings hard enough to make chords, so I adapted equipment so he could meet this goal. He said that he was able to make chords for the first time the night following that session.”

“I worked really hard,” said Lewis. “I actually talked to my hand – a lot. And, it worked! At the time, I didn’t feel like I was making progress, but now looking back – I see how far I have come.”

In speech therapy, therapists typed up lyrics of songs and added distinct spaces where there were pauses in the lyrics.

“I was trying to speak too fast, so by adding the spaces I could visually see where I needed to pause,” said Lewis.

His speech therapist, Barbara Nguyen, M. A., CCC-SLP, said, “In therapy, we would listen to music on YouTube and he would imitate the singer and try to sing along. Reading paragraphs using specific speech strategies, like visually adding spaces to the written text, helped him with the speed of his speech.”

Today, Lewis is gigging again and can be found back on stage in various locations around Houston. In addition, he performs at open mike nights, private parties and weddings. He walks unassisted and drives himself around.

“I’m still working hard – but the people at Katy Rehab performed miracles on me!” said Lewis. “My new goal is to get back as good as I was on the guitar before the stroke.”

“During his final occupational therapy appointment, he brought his guitar to his session and filled the therapy gym with his music,” said Rachele. “I continue to admire his determination and motivation. I have no doubt, that through his music and compassion, he will successfully continue his personal journey, which will include motivating others whose lives have been affected by stroke.”

Would you like to make an appointment, get more information about our services or ask about rehab? Please complete our Contact Us form below or call us at 1 (800) 44-REHAB (73422).

Thank
You!
Thank you. Check your email for details on your request.